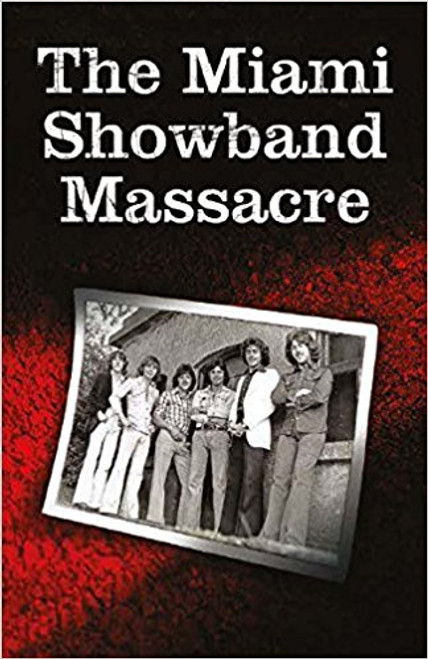 Before this revised edition, the first edition of The Miami Showband Massacre, published in 2007, was the long-awaited inside story of the band, the massacre and the controversial cover-up as the UK state protected those responsible.

The atrocity was headlined all over Ireland and beyond as The Day The Music Died as The Miami Showband was the most popular band in Ireland at the time. On July 31st 1975 their mini bus was stopped by what looked like a British Army patrol but was in fact the Loyalist terrorist group’s UVF’s notorious Glenanne Gang, some of whom were in the British Army’s locally recruited UDR regiment.

The terrorists planted a bomb in the minibus which exploded prematurely killing two of the bombers immediately. Their comrades then machine gunned the band, killing three and leaving the author, seriously injured Stephen Travers, to play dead in order to survive. Since publication much more of the Collusion between the UVF gang responsible and the British Military Intelligence has come to light and this 2017 edition includes pertinent revelations regarding Collusion, elements of which are now being exposed.

Stephen Travers was born in 1951 in the beautiful market town of Carrick on Suir in south Tipperary, on the borders of Waterford and Kilkenny. From an early age, it was obvious that he was a gifted musician and, by the beginning of the 1970s, he was one of the most admired bass guitarists in Ireland. In 1975, having played with some of the most respected bands in the country, he joined Ireland’s legendary Miami Showband. But, just two months later, in the early hours of July 31st, on their way home to Dublin from an engagement in the north of Ireland, three members of the band were murdered by British security forces in collusion with the Loyalist terrorist organisation, The Ulster Volunteer Force (The UVF), and Stephen was shot with an explosive dum-dum bullet and left for dead among the terrible carnage that will live forever in Irish history as The Miami Showband Massacre. In The Miami Showband Massacre, Stephen Travers remembers the highs of being in the most successful showband of the 1970s and how it all ended in a terrifying moment of death and destruction but he also looks for answers as to why his friends – Tony Geraghty, Fran O’Toole and Brian McCoy – were killed.

Stephen Travers was one of two band members who survived the UVF’s attack on The Miami Showband. A gifted musician, Stephen was already a rising star bass player when he joined Ireland s most successful Showband. Since the massacre Stephen has been very active in pursuing a campaign for peace, truth and justice for all victims on all sides of Irelands Troubles conflict. Stephen’s high profile supporters include the present President of Ireland as well as the previous President and many many others. Travers was a founding director and the first editor of The Irish World newspaper in London

Neil Fetherstonhaugh, from Dublin, is a journalist with Ireland's biggest selling newspaper, The Sunday World. An award-winning travelwriter, Neil has written a number of highly acclaimed books including They Never Came Home the story of The Stardust Fire, and he co-authored the best-selling 'This is - - Christy Dignam' with the legendary Aslan front man, Christy Dignam.