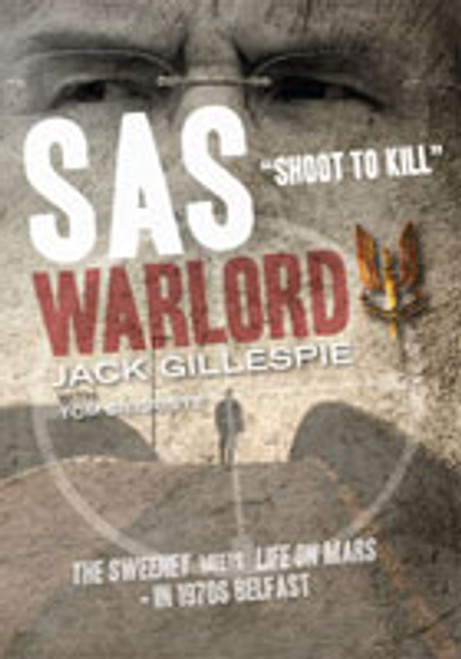 “The Sweeney meets Life On Mars – except for real.”

“We were a legalised death squad, pure and simple. The Special Forces were not from a peacetime Army. They were the soldiers who had never stopped fighting Britain’s secret wars.”
SAS Warlord – Shoot to Kill deals with the SAS’s Jack Gillespie’s time in the British Army’s now notorious MRF (Military Reaction Force). This long-denied unit, with soldiers drawn from the SAS, was tasked with seeking out and shooting IRA gunmen. Gillespie posed as a press photographer deep in enemy territory. On other days, the camera was left at home, and the Thomson machine gun was taken in its place.

The target in 1972 was none other than Gerry Adams, then a commander in the Belfast IRA. The day would start with a “rogues gallery” when photos of known IRA suspects would be shown. Then the MRF personnel would choose their weapons from an unofficial stash. Gillespie’s area was the IRA stronghold of West Belfast and he and his team would drive around
looking for their targets, often assisted by IRA men who had been “turned” by the unit.

The book conveys the breathless, frantic nature of the unit’s day, records the drinking and often dark humour of the soldiers, and graphically describes the tension of undercover missions in the heart of enemy territory. Many incidents will resonate with those familiar with the Troubles. However the essence of the story is universal – that of one man trying to stay alive a deadly game, day by day, hour by hour. British readers will scarcely believe the account as it contradicts the propaganda they were told about their army in Northern Ireland for a generation. And for them to hear it from SAS-legend Gillespie, known as “the hardest man in The Regiment”, and no enemy of Britain, is all the more remarkable.

JACK GILLESPIE was the youngest ever recruit to the SAS and was associated with the Regiment for more than 30 years, serving all over the world. From the jungles of Malaysia, to the deserts of Aden, to the mean streets of Belfast, he saw it all. Due to his fearless reputation he became known as “the hardest man in the regiment”. His second book, covering his overall SAS career, is published in 2013.